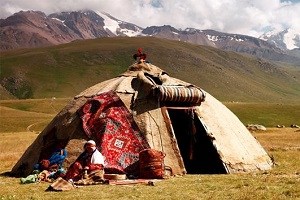 The Shahsavan are a nomadic pastoralist tribe located in northwest Iran. These Azeri-Turkish speaking pastoralists migrate between their winter quarters, qishlaq, in the Mughan steppe of Azerbaijan, and their summer quarters, yeylaq, around Mount Sabalan, approximately one hundred fifty miles to the south.

The Shahsavan, unlike many other nomadic tribes in Iran, do not have just one recognized chief (khan). Instead the influential chiefs (begs) of the five or six principal tribes act as intermediaries with outside authorities. The Shahsavan begin their migration southward to Mount Sabalan (15,816 ft.) approximately 45 days after the spring equinox. The weather determines the exact timing of departure. The nomads usually spend three to four weeks covering the 150 miles between the winter and summer quarters. For the migration, several camps form a caravan consisting of 30-60 tents. A recognized leader organizes the migration of different groups in accordance with the movement of other sections of the tribe. Daily migration starts soon after midnight and continues until midday, when sun and heat prevent further travel. The flocks begin to move several hours before the caravan of camels and other pack animals. Camels transport the women, children, lambs, chickens, the wooden frame of the tent, and the colorfully woven luggage containers. The men ride horses or walk. By late morning, the caravans catch up with the flocks. Several men ride ahead to locate appropriate pastures and a camping site where the tribe will settle for the night. A day’s travel covers between six and ten miles.

Pack animals are unloaded upon arrival. The diverse vegetation of the region has created suitable rangelands for livestock to graze. The dome-shaped tents take only 45 minutes to set up. A circular crown is held up by a man, while 24 to 32 bent wooden rods are inserted into it; the frame stands like a giant spider. To give the tent lateral strength, woolen bands are wrapped around the frame, and a large wooden peg is driven into the ground under the crown to tie the tent down. Once assembled, the frame is covered by several sheets of thick felt, ketcha, which are tied to the frame and the ground. A lighter tent is set up by shepherds or families who do not have a larger one. Everyone is involved in setting up camp. Afterward women fetch water, prepare food, and shortly after sunset everyone goes to sleep. The next day begins soon after midnight.

Shahsavan nomads traditionally raised flocks of sheep and goats, the former for milk and milk products, wool, and meat, the latter only in small numbers, mainly as flock leaders. They used camels, donkeys, and horses for transport. Most families raised chickens for eggs and meat, and a few kept cows. Every family had several fierce dogs, to guard the home and the animals against thieves and predators. Bread was their staple food. Some nomads had some settled relatives with whom they cooperated in a dual economy, sharing or exchanging pastoral for agricultural produce. Most, however, sold milk, wool and surplus animals to tradesmen in order to obtain wheat flour and other supplies. Some worked as hired shepherds, paid 5 percent of the animals they tended for every 6-month contract period. Others went to towns and villages seasonally for casual wage-labor. Itinerant peddlers visited most days, but householders went on shopping expeditions to town at least twice a year, e.g. during the migrations. Most purchases were made on credit, against next season’s pastoral produce. The wealthiest nomads raised flocks of sheep commercially, and owned shares in village lands as absentee landlords.

Women too had their elders (aq-birčak, “grey-hairs”), consulted privately by the male elders; among the women the female elders exercised influence in public, at feasts attended by guests from a wide range of communities. At feasts, men and women were segregated. While the men enjoyed music and other entertainment, in the women’s tent the elders discussed matters of importance to both men and women, such as marriage arrangements, disputes, and irregular behavior among community members or broader subjects bearing on economic and political affairs. They formed opinions and made decisions, which were then spread as the women returned home and told their menfolk and friends. This unusual information network among the women served a most important function for the society as a whole.

Shahsavan women produced a variety of colorful and intricate flat-woven rugs, storage bags and blankets, and some knotted pile carpets, but these were all for domestic use and figured prominently in girls’ trousseaux on marriage. In the 1970s, however, the international Oriental Carpet trade recognized that a whole category of what had previously been regarded as “Kurdish” or “Caucasian” tribal weavings were in fact made by Shahsavan nomads. Meanwhile, hard times and escalating prices forced many nomads to dispose of items never intended for sale. Since the Islamic Revolution, Shahsavan weavers have increasingly produced for the foreign market, adjusting their styles accordingly.